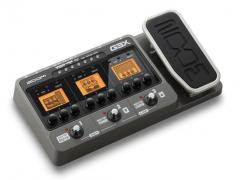 A partner for recording. A powerful weapon for live performance. With the G3 version 2.0 and the G3X, the maximum number of simultaneous effects has been increased to six, and a new scrolling function allows you to control all of them intuitively using the stomp box size panels. Along with 94 types of effects, 22 amp models with realism so advanced that they include overtones are at your command. With the addition of the G3X and its expression pedal that increases your sonic freedom, ZOOM has introduced another revolution in guitar sound creation.

With the three stomp box style panels, you can intuitively use and edit up to six models of effects and amps at the same time. Using the scroll function, you can put the effect you want to adjust on one of the large screens in an instant. Since each effect unit has three knobs, not only is sound creation easy, reordering effects is also simple. No matter what the situation, you will be free from stressful operations.

The trio of stomp box style panels allows you to sculpt sounds intuitively using their footswitches and knobs to control the effects shown on their large displays. We have added a new scroll function for the three screens, making it easy to edit any of the up to six simultaneous effects. In addition, other advantages that exemplify the ZOOM brand include automatic saving of effect parameter changes and the freedom to easily rearrange the effects as you like in the chain. Anyone can master the G3 and G3X without depending on the manual.

Realism so advanced that it includes overtones - 22 amp models

In addition to models of 13 amps that are among the best in the world, 9 new amp models have been added that are so realistic they include harmonics. Each amp has its own cabinet modeling, so even the sonic characteristics that vary depending on physical traits—the number of speakers and cabinet materials—have been impressively re-created. By combining amplifiers and cabinets from different makers, you can even create your own unique amp sounds.

US BLUES: Crunch sound of a Fender Tweed Bassman

VX JMI: This simulates the sound of an early model of a class-A British combo amp

TONE CITY: This Models the sound of a Sound City 50 Plus Mark 2, legendary British amp.

TANGERINE: This models the Orange Graphic 120 with its unique design and sound

MS-CRUNCH: The crunch sound of the Marshall 1959 that has given birth to many legends

BGN DRIVE: This simulates the lead sound from channel 3 of a Bogner Ecstasy

ALIEN: This simulates the high gain sound of the Engl Invader, which features a powerful low-end

REVO-1: This simulates the high gain sound of a Krank Revolution 1 Plus

Expand your sonic expression with a pedal

Starting with Jimi Hendrix and Eric Clapton, numerous guitarists have found the wah-wah pedal to be indispensable. The G3 and G3X include vintage wah-wah modeling, so you can use an expression pedal to get that classic sound.(*) The auto assign function means the pedal is ready to use as soon as you choose an appropriate effect and you can start playing without any hassle. Moreover, in addition to pitch-shifting, volume control and other traditional pedal effects, parameters such as the gain of drive effects, the rate of modulation effects and the mix level of delay and reverb effects can also be controlled in real time as you play guitar.

*With the G3, you will need to connect an FP02 expression pedal (sold separately).

Our new sigmoid curve clipper re-creates the smooth clipping of a tube amp’s waveform. With its tube distortion, the G3/G3X can simulate amplifier sounds, including clean, crunch and full-gain drive tones that are authentic to the original models while maintaining the nuances of picking and strumming techniques.

G3/G3X has 94 diverse types of stompbox presets, including some of the world’s most popular guitar pedals. You can use up to six effects in any combination. G3/G3X’s wide range of effects includes distortion, compression, modulation, delay and reverb. Its HD Reverb uses DSP power to produce a rich resonance that rivals outboard gear used in professional studios and live setups.

The newest generation of DSP: ZFX-IV.

G3/G3X utilizes the all-new ZFX-IV DSP effects processor. This generation of ZFX boasts amazing power, upgrading everything from sound to function and operability over previous versions. By using 32-bit floating-point processing, G3/G3X possesses amplifier sounds that are more realistic than ever before.

G3/G3X’s Looper capabilities include 40 seconds of phrase recording and overdubbing. The “sound-on-sound” function allows you to layer guitar sounds as many times as you want in real time. You can use looped sounds as simple backing tracks or create a “full band” feel with the built-in drum machine and DSP effects for a live solo.

* When the UNDO/REDO functions is enabled, the recording time is limited to 20 seconds.

G3/G3X operates as an audio interface, letting you record directly to your computer via USB. All of your sound settings used during rehearsals or live performances can be recorded to your favorite DAW such as the included Steinberg Sequel LE recording software. The pedal’s direct monitoring capability eliminates any latency problems, assuring realistic studio conditions and hassle-free operation.

Choose from 40 different rhythm patterns, including 4, 8 and 16-beat, shuffle and many others. The tap key also makes it easy to directly set the tempo and start a jam session anytime.

Select from over 100 built-in DSP effects to create your own sounds on G3/G3X. Try its renowned compression and wah pedals, chorus effects with stunning depth and resonant reverbs. Or let your tonal imagination run free with dynamic flangers, tremolos, harmonized pitch shifters, multi-tap delays, reverse delays and much more. G3/G3X can store up to 100 of your original creations without a hitch.

Balanced XLR output for DI use.

With its built-in XLR output, you can avoid DI boxes completely and directly connect G3/G3X to any mixing console and maintain a balanced, high quality signal. In addition, a convenient Pre/Post switch can direct an effected sound to the main outputs while passing the guitar signal directly to the XLR output without the help of an A/D converter.

Output modes for stage or studio.

Different output modes allow you to optimize G3/G3X’s tones based upon its connection with your personal rig. In addition to modes for the front inputs of combo and stack amps, G3/G3X can be used as a preamp when connected to a power amp input. By selecting the direct mode with a line connection, you can achieve a realistic guitar sound that is optimal for live use and recording.

Add a G3/G3X to your pedalboard.

G3/G3X is perfect for use in combination with traditional stompboxes. By adding a G3/G3X to your pedalboard, you will decrease the size and complexity of your setup, while expanding your system’s effects and modeling capabilities.

The pedal’s Tuner function offers smooth, real-time response with precise guitar tuning accuracy. Whether you’re in the middle of a performance or practicing alone in your room, simply hold down the pedal’s center footswitch to start getting your strings back on pitch. In addition, G3/G3X’s LCD displays and LED indicators make the feature easy to use on a dark stage, where you can also mute the output for seamless tuning.

G3/G3X can operate on three different power sources: AC adapter (included), batteries or USB bus power when plugged into your computer. Four AA/LR6 alkaline batteries provide over six hours of continuous playing. Whether on stage or in the studio, G3/G3X gives you reliable power options.

With G3/G3X’s amazing 1ms patch change speed, you will never miss a beat. Change from rhythm playing to a solo in an instant by simply pushing the switch.

The optional foot switch (FS01) allows tap tempo input for rhythm, looper, and effects. You can also use an FS01 to mute the Delay/Reverb input or turn Delay Hold on or off.

Zoom’s Edit&Share software, which is available as a free download for the G3/G3X, allows you to create, edit and save your personalized amp and effect settings on your computer. Use its amp/effect sorting feature to easily locate your sounds and drag-and-drop options to rearrange patches for editing purposes. With Edit&Share, you can download the latest patches online, as well as share your patches with others.

There are no reviews for this product.

Write Your Own Reviews